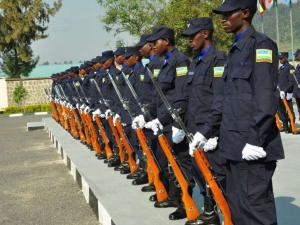 The Rwanda National Police has dismissed up to 56 police officers between January and October as the force cracks down on gross misconduct.

Close to 1,000 officers were dismissed between 2015 and 2020, according to official data of the Ministry of Public Labour and Service, detailing all blacklisted employees.

The Rwanda National Police (RNP) has had a “zero tolerance to corruption” stance over the years in attempts to tackle corruption.

However, the force is still considered one of the most corrupt institutions, particularly the traffic department.

Due to the high prevalence of corruption and bribery in the police force, the institution has constantly performed poorly in rating by the public.

The prevalence of bribery in government institutions was topped by the Traffic Police at nine percent in 2019, according to Transparency International, although this was a significant drop from 14 per cent the previous year attributed to anti-corruption measures put in place by the force.

The RNP’s sister institution, the Rwanda Investigative Bureau — which is made up fractionally of former police officers — comes second on the bribery index.

The drop in bribery prevalence among police officers is attributed largely to internal investigations as well as the public who act as whistle-blowers while dealing with the police.

“Our investigators have witnessed it first hand as police officers are arrested in the act of soliciting or receiving bribes,” Apollinaire Mupiganyi, the executive director of Transparency International Rwanda told The EastAfrican.

“On several occasions we have made sure that our researchers are on the ground when a police operation is ongoing to arrest one of their own. So we can attest that misbehaviour among police officers has reduced significantly,” Mr Mupiganyi said Mr Mupiganyi said.

In the latest incident, on November 11, two policemen were arrested after they were caught red-handed soliciting bribes from motorists.

The force did not spare them and they were paraded in public to shame them and deter others.

According to Transparency International, corruption is a manifestation of having an ill-trained force, on a low wage.

“Good and timely remuneration for police officers should be emphasised because most of them justify corruption due to low earnings. Police has endeavoured to train them to serve the country in a professional manner and this is paying off,” Mr Mupiganyi said.

But besides corruption, Rwandan police have been dogged by allegations of being trigger happy. Several investigations have ensued when videos of police officers and security personnel using force excessively against residents are posted on social media platforms.

In August, police arrested one of their own officers for shooting and killing one person in Ngoma district for failing to observe curfew hours put in place to fight the spread of Covid-19.

The police to population ratio in Rwanda stands at 1 to 500 and regular recruitment is advertised to ensure the replacement of officers who are dismissed or retired.