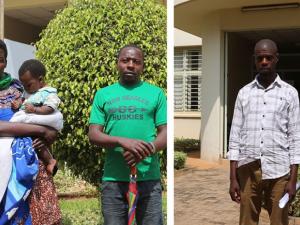 Three Rwandans who say they were illegally detained in Uganda for close to a year have filed a case in the East African Court of Justice (EACJ) seeking compensation from the Ugandan government for illegal detention, torture and inhuman treatment.

The case was filed by renowned city lawyer Richard Mugisha of Trust Law Chambers, on behalf of Venant Hakolimana Musoni, 35, a teacher by profession, Eziekel Muhawenimana, 36, and his wife Esperance Dusabimana, 35, both farmers from Rubavu district in Western Rwanda.

Hakolimana, who was a teacher in Ethiopia before traveling to Uganda where he regularly went to check on his property and business, was arrested last year and spent 10 months in prison before he was released and deported back to Rwanda in April this year.

Muhawenimana and Dusabimana, who had traveled to Uganda in July last year to attend a funeral, were offloaded from the bus they were travelling in along with other Rwandans before being held in Ndorwa Prison, Kabale district on accusations of illegal entry into Uganda.

“I have this morning filed references to the East African Court of Justice on behalf of Hakolimana Venant Musoni, Muhaweniman Eziekel and Dusabimana Esperance,” Mugisha told journalists on Monday.

“These individuals are Rwandan nationals whose human rights and other rights were violated by the Government of the Republic of Uganda in total disregard of its obligations under the Treaty establishing the East African Community and the Common Market Protocol,” Mugisha added.

Mugisha, who is also the current President of the East African Law Society (EALS) said that the allegations on which his clients were arrested and detained for lengthy periods were ‘ridiculous’ because they had entered Uganda through known ports of entry with all the necessary documents.

The City Lawyer told Journalists that what happened to the trio in Uganda is extremely disturbing and a blatant violation of their human rights, including dispossessing them of their money, torturing them in detention and subjecting them to forced labour, among other violations, which he said don’t make sense.

“I have agreed to take up this matter in order to assist the concerned persons but also to contribute to the preservation of the East African Community,” Mugisha said, adding that he believes the EACJ will deliver justice for the victims.

“I strongly believe in the EAC and the commonality of our destiny as East Africans. It is therefore important that the Government of the Republic of Uganda be held to account for the breach of its obligations under the legal instruments of the East African Community.

The community will only continue to thrive when Partner States honor their obligations,” he said.

Hakolimana, a Rwandan who was teaching in Ethiopia at the time of his arrest but had properties and businesses in Uganda, is seeking damages from the government of Uganda worth $1 million through the Arusha-based court.

Muhawenimana and Dusabimana said they were arrested in Rubanda district, having entered through Cyanika border post, before they were taken to Kabale Police Station and later charged with illegal entry into Uganda.

They were sentenced to 13 months in prison and later released in April this year before being deported to Rwanda. They are seeking $100, 000 in compensation from the Ugandan government.

“We have made prayers to the court to declare that the Republic of Uganda is in breach of the Treaty establishing the EAC as well as the Common Market Protocol,” he said.

“We have also made prayers for compensation of the victims as well as general damages including punitive damages against the Republic of Uganda,” Mugisha said, adding that he is convinced that the regional court will deliver justice.

The renowned lawyer said that there are many more Rwandans who were illegally detained in Uganda who want to file cases against the Ugandan government and as the EALS President he has an interest in ensuring justice and well-being of citizens of the bloc.

“I don’t see any reason why such a case would be politicized. This is purely legal. What happened is known, we have evidence. The duty of the court is to arrive at a decision that is impartial and based on facts,” Mugisha said.

On their part, the victims said that they incurred losses during their stay in detention and had their property and money forcefully taken from them by Ugandan security agents.

“What we want is to see that we are compensated for the time and resources we lost, violation of our human rights, ill treatment and forced labour, among other things,” Hakolimana told Journalists.

On his part, Muhawenimana said that they were traumatized by their experience in the Ugandan jail, where his then pregnant wife gave birth to a baby who is now 9 months.

“We suffered at the hands of prison warders and security agents who regularly tortured us and leveled many accusations against us. My wife was pregnant and went through difficulties, including forced labor. Everything we had fallen apart,” said Muhawenimana.

The regional court is yet to confirm receipt of the cases and schedule the hearing dates.

The Government of Rwanda has in the past couple of years formally complained to Uganda over hundreds of Rwandans it says are illegally detained by Ugandan authorities, mostly without trial, while dozens have also been illegally deported back to Rwanda, despite entering Uganda legally, according to authorities.

A statement issued by the government last week indicated that close to a thousand Rwandans, whose names are known to the Government of Uganda, remain illegally detained in inhuman conditions inside the East African country, with no access to consular services, while others have been killed or maimed.

However, the Government of Uganda has not acted on the cases despite several formal diplomatic notes dispatched to Kampala and subsequent talks.

Rwanda says this is mainly the reason Rwandans were advised not to travel to Uganda in March until the issues are resolved.

Rwanda’s accusations were corroborated by a United Nations Experts report issued in December 2018 which fingered Uganda as a source of new recruits for ‘P5’, a group that brings together different Rwandan rebel groups led by RNC and others mainly composed of dissidents.