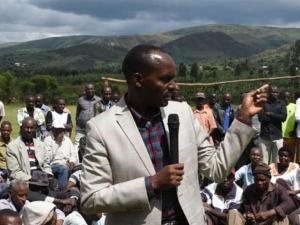 Residents of Tabagwe Sector, in Eastern provice have been warned against using irregular, porous borders to cross into Uganda for any reason, with officials saying that they cannot assure them of their security once they have crossed.

This was during a meeting with the residents around the border area with Uganda, which was attended by Eastern Province Governor Fred Mufulukye, security officials and other local leaders.

The two Rwandans, who were picked by Ugandan soldiers during the service at Rwamatunguru Catholic Church, have been identified as Pierre Samvura and Eric Hategekimana.

They were at the function at the invitation of a Ugandan friend they identified as Silver.

“Now we have our Ugandan colleagues saying that these two individuals were Rwandan soldiers, which they were not, because you know them better than anyone; we are in process to explain to them that the person kidnapped are just ordinary citizens, not soldiers, and were in Uganda for a social event, a baptism ceremony to be precise,” said Mufulukye.

He also called upon the residents, most especially taxi moto operators, to be respectful of security organs saying that whenever asked to stop, they should stop.

The Governor was alluding to a separate incident that took place on Friday last week, when a man riding a motorcycle resisted calls by security officers to stop, which resulted into his shooting.

The man, who was suspected to have been smuggling into the country used apparel (Caguwa) from Uganda, decided to turn aggressive towards the security personnel, and got reinforcement from machete-wielding thugs from across the border.

As a result, the man, who has since been identified as John Baptist Kyerengye, was shot dead in the ensuing fracas, together with a Ugandan identified as Alex Nyesiga, who was among the mob.

"When they stop you and you refuse to stop, you are risking your life…nobody knows what you might be carrying on your motorbike, you may be transporting what brings harm to people.

"You remember a few years back, we had issues of grenade detonations in Kigali and surrounding areas, it took lots of effort to end this problem but how do you think those grenades were sneaked into the country? Certainly not through the airport but such illegal border crossings,” he said.

Colonel Albert Rugambwa, the Rwanda Defence Force Commander in Nyagatare, Gatsibo, Kayonza and Rwamagana districts assured area residents of security but also told them that there is a role they have to play.

“It is simple what we ask you is cooperation, nothing else, the rest we shall handle,” he said.

In March 2019, the Government of Rwanda issued a travel advisory warning Rwandans against traveling to Uganda in the wake of sustained arrests and torture of Rwandans by security agents in the neighbouring country.

Kigali says over 1000 innocent Rwandans are languishing in ungazetted detention centres in different parts of Uganda, and says it issued a travel advisory because it could not guarantee its citizens’ security across the northern border.

Some of the victims have been dumped at the border in very bad shape, some in wheelchairs, as a result of the ordeal they were subjected to in torture chambers.

BY The New Times