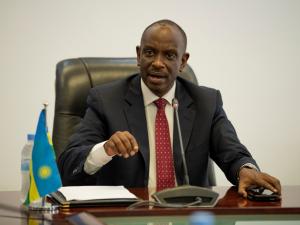 Rwanda has said that its travel advisory to citizens entering Uganda still stands despite government provisionary opening cargo transit routes on the Gatuna-Katuna border highway which has been under construction.

The Gatuna- Katuna border is the busiest crossing between Rwanda and Uganda.

In March this year, Rwanda strongly advised its citizens not to travel to Uganda, following repeated torturing, killing and unlawful detention of Rwandan citizens including businessmen living and working in Uganda.

This was followed by Rwanda temporarily closing the One Stop Border Post for road construction purposes on the Gatuna highway, which was interpreted by Uganda as a way of blocking Ugandans from exporting goods to Rwanda.

“The travel advisory has not changed. It remains as before,” said Rwanda’s foreign Minister, Dr. Richard Sezibera on Monday at parliament.

Sezibera explained that the Gatuna border was never closed for business but for construction reasons which include completion of One Stop Border Posts (OSBP) on each side of Rwanda and Uganda.

“Once the road is tested and seen as fit, it will resume normally, but we don’t know when the Ugandan side will complete construction of the post, for all of us to work effectively,” Sezibera told Senators.

Uganda on their side, advised its citizens not to use Gatuna border despite the reopening.

“If it is a trial let Rwanda use their own trucks;” he said