Samia: Tanzania gearing up to connect countries through rail, road 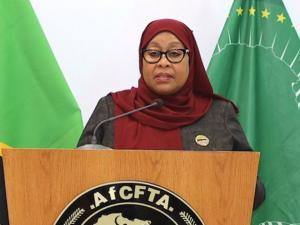 Tanzania is ready for regional integration and is in the process of completing road and railway networks with the goal of linking neighbouring countries, hence contributing to continental integration efforts, President Samia Suluhu Hassan has said.

Connecting Africa
However, the country will need more external funding to finance the construction of the next phases of the Standard Gauge Railway (SGR) as well as proposed highways to Kenya, Democratic Republic of Congo and Burundi, she said on Wednesday in Ghana after receiving an award for her country’s recent infrastructure projects.

“It is my belief that with connecting the RECs (regional economic community blocs), eventually our entire continent will be connected,” she said.
“We think that the connectivity shall play a major role within the African Continental Free Trade Area (AfCTA).

“If we must progress, Africa must produce, process and trade within its boundaries. The connectivity must begin within our national boundaries then extend within our regional economic blocs then eventually to the entire continent.”
The AfCTA is the continental treaty meant to improve intra-African trade by eliminating barriers. It will require better trade to facilitate movement of goods.

Award
The Tanzanian leader received this year's Super Prize Great Builder- Babacar Ndiaye Trophy, an award organised by infrastructure information platform Acturoutes, with the Media for Infrastructure and Finance in Africa (MIFA), a network of African journalists specialising in road infrastructure, and sponsored by the African Development Bank.

Named after a former president of the African Development Bank between 1985 to 1995, previous winners include Kenyan President Uhuru Kenyatta, Senegal’s Macky Sall, Abdel Fattah al-Sissi of Egypt and Muhammadu Buhari of Nigeria.

Samia is the first female winner of the award, even though most of the projects were started by previous Tanzanian administrations.
In her acceptance speech, Samia recognised her predecessor John Pombe Magufuli, who died in March last year, as the most deserving compatriot to have won the accolade.

The selection committee of the prize said Samia had shown “a clear vision” and has prioritised infrastructure development.
“As a result, she is committing significant resources to new roads, railways, ports and airports to further improve living conditions of the people.

“The president is also spearheading regional integration projects through regional connectivity projects such as railways, which will maximise regional trade,” Mike Salawou, Director for Infrastructure and Urban Development Department, AfDB, said in a note.
“We have awarded it to you to encourage you to continue building roads for the whole of Tanzania, and also to connect with other African countries,” he said.

Projects
Tanzania is putting up a 2,724-kilometre SGR, part of a long-term vision to link the port city of Dar es Salaam to the western parts of the country and on to Uganda, DRC and Burundi in future.

President Samia said Tanzania will need more funding for the second phase, even though it borrowed to finance the first.
“We still count on the support of AfDB to implement critical road projects. I strongly support the call for AfDB to step up revenue mobilisation, including [reaching out to] equity and stock markets to respond to challenges we are facing,” she told an audience after receiving the award.

“We are aware of the immense need for social economic development within Africa. We need to urgently address the economic challenges in Africa to create more jobs for women and youth.”

The AfDB has funded more than 36,000km of highways in Tanzania, out of the country’s 180,792km paved and unpaved roads, according to data from the Tanzanian government. In the last 15 years, the Bank has spent about $2.1 billion on infrastructure in Tanzania.

The government is targeting to complete the renovation of the Arusha-Namanga road; complete the Tanga-Bagamoyo highway which connects to Kenya’s coastal artery; as well as several projects linking to Uganda, Burundi, DRC and Zambia. These are critical for Tanzania’s vision of expanding trade with neighbours.

Tanzania is also in discussion with AfDB to fund the construction of the next phases of the SGR beyond Tabora and on to neighbouring countries.

“Our overarching goal is not only to achieve connectivity within our country or region but to extend it to the neighbouring countries, especially the member countries of the Southern Africa Development Cooperation (SADC) and the East African Community (EAC),” she said.
https://www.theeastafrican.co.ke/tea/news/east-africa/samia-suluhu-tanza...