Seven police officers fired for crossing the border into Malawi 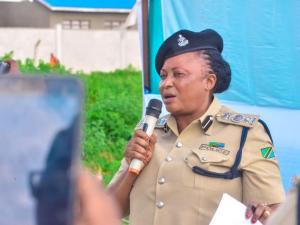 Songwe. The Tanzania Police force has terminated the services of seven police officers who were attached to a police post in Ileje District after they were found guilty of crossing the border into Malawi
The officers are said to have been carrying firearms and dressed in police uniforms, something that is considered as gross misconduct.
Songwe Regional Police Commander, ACP Janet Magomi said the move came after the seven officers were brought before the Military Court on September 20, 2021 and found guilty.
She named the sacked officers as G.3695 D / SGT Ramadhani, H.694 PC Edward, H.8096 PC Safari, WP.12285 PC Anastazia, H.9727 PC Joseph, H.9781 PC Husein and H.8764 PC Jumannne .
Magomi said that on September 15, 2021, the officers were using a police vehicle and while carrying out their duties they arrived at Ikumbilo Village.
He said while in the village they met a motorcyclist whom they suspected of carrying smuggled goods, they immediately tarted chasing him before the man fled and crossed into Malawi.
She said while chasing the bodaboda cyclist, the officers met a mob inside Malawi who attacked them with stones
According to Magome, the officers responded by firing warning shots to disperse the mob.
The police chief added that after the altercation, Malawian police officers at Ipenza station arrived at the scene and quelled the riots and then arrested four of them, while three of their three colleagues escaped.