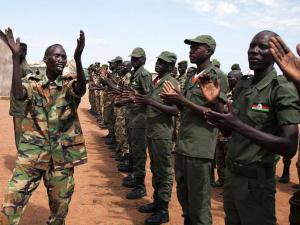 One source  from Gorial on Tuesday that government forces were caring out forceful conscription in areas of Wunrok and Tur Alei in Gogrial state.

“There have been recruitment in Wunrok, Tur Alei and several parts of Gogrial state. It is the South Sudan’s army that is caring out the recruitment process,” the source said on condition of anonymity on Tuesday.

Another source this morning said a minor recruitment campaign was carried out in Tonj between Sunday and Monday but has since subsided with the locals expecting a resurgence of the process in the next few days.

“The SPLA carried out recruitment,” the source said. “This was carried out in several areas Tonj and they did that between Sunday and Monday but they have stopped but everyone know exactly when they will be back. In the next few days.”

If true, the government action would be a blow to the ongoing peace process between the government and opposition groups and that would bolster fears that the parties may be preparing for more fighting as implementation of security arrangements is facing difficulties.