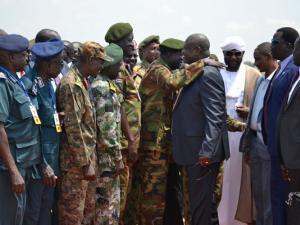 South Sudan’s opposition leader Dr Riek Machar landed in Juba Monday for face-to-face talks with President Salva Kiir in a bid to salvage the stalled peace agreement.This is the first time in almost a year that he has visited the capital.

Machar landed in the capital in a Sudanese plane, preceded by two jets carrying a large delegation of around 60 people and security officers from Khartoum where he is living in exile, an AFP reporter witnessed.

South Sudan Government
@SouthSudanGov
Dr. Riek Machar arrives in Juba for meeting with President Salva Kiir. The meeting aims at discussing the outstanding issues related to the implementation of the Revitalized Agreement on the Resolution of Conflict in the Rep of South Sudan (#RARCSS). #KiirMacharMeeting #IGAD

The meeting comes as a November deadline looms to form a power-sharing government, a key plank in a 2018 peace agreement that has been delayed by disputes.

The key areas of discussion include the implementation of security arrangements, the number of states and their boundaries.

The visit comes a few days after IGAD Special Envoy to Juba urged the two leaders to hold direct talks and build mutual trust and confidence for the smooth implementation of the peace process.

South Sudan descended into war in 2013, just two years after the country gained independence, when Kiir accused his former deputy Machar of plotting a coup.

Multiple attempts at peace have failed but in September 2018 the warring parties signed an agreement to form a unity government, which would see Machar return to government as vice president.

Crucial technical steps contained within the agreement, such as creating a unified army and agreeing on the internal boundaries of states, have failed to make progress.

The power-sharing arrangements under the peace deal were supposed to take effect in May. But the process was delayed by six months until November.

Last week, President Kiir said the new government would be formed on November 12 as previously agreed upon.