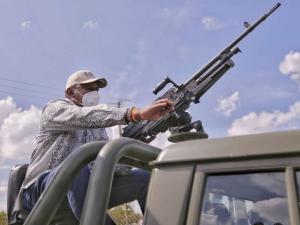 The President, who toured the Rural Border Patrol Unit (RBPU) headquarters in Kitui County, said the police unit was instrumental in Kenya’s fight against terror by ensuring terrorists and their illicit weapons do not find their way into the country.

“Your service at our country’s borders has been exemplary. You stand vigilant at the frontline in ensuring terrorists, smugglers, human traffickers and all other criminal elements who threaten our peace and way of life are kept away,” President Kenyatta told the officers at their Kanyonyoo base.

He said several terrorist plots have been thwarted, human trafficking rings smashed, smuggling of illegal weapons and unlawful entry into the country greatly diminished by gallant officers of the police unit.

“Today I chaired the National Security Council which approved additional equipment for specialised units like RBPU – including body armour for officers, new armoured vehicles, modern weaponry and the best available equipment,” he said.

President Kenyatta assured the officers that despite the austerity measures undertaken to channel funds to finance interventions geared to contain the spread of the deadly coronavirus, the security sector will get maximum resources to achieve its crucial mandate.

In his visit, the first since the unit was established, Mr Kenyatta opened a new housing complex with 60 units for officers and was taken through various projects, including an ultra-modern Level 5 hospital being constructed with the help of the United States government.

“I want to thank the US government for their exceptional support to Kenya’s overall security sector reform programme which includes building the field hospital in Kitui for security officers wounded in line of duty,” said Mr Kenyatta.

He wished quick recovery to officers from the General Service Unit and Anti- Stock theft Unit who were injured last weekend.

The unit, whose officers are drawn from the Administration Police, was established as part of the government’s plans for long-term solutions to emerging global security threats in the country.

It complements the Kenya Defence Forces in handling surveillance of Kenya's  borders and also hosts the regional anti-terror police training college, where security officers from the East African Community member states are trained.

Plans to upgrade the AP Border Patrol Unit into the main training hub for security officers in East and Central Africa have attracted the attention of global superpowers, with the United States, British and Australian governments offering training and equipment support.

The anti-terror college, which sits on 5,000 acres of land, has helped to decongest police training colleges in Kiganjo and Embakasi whose limited space has frustrated government efforts to enhance the human capacity of security agencies.

The County Government of Kitui provided the 5,000 acres along the Nairobi- Mwingi-Garissa highway -- a key route to lawless Somalia -- on a free leasehold that will run for 33 years.

In a recent interview, College Commandant Abdullahi Aden explained that global security trends placed more emphasis on formation of specialised units to fight emerging crimes like terrorism, piracy, cybercrime and cross- border crimes and hence the need for enhancing capacity in dealing with the challenges.

Mr Aden declined to discuss the exact level of financial and material support from foreign governments but disclosed that the centre will have the capacity to host up to 1,000 officers on various security courses.

The establishment of a regional security training college is also in line with the East African Community (EAC) Defence Protocol, a policy proposal that creates the framework for member states' co-operation in inter-state security.

Once completed, security officers from East and Central Africa will have a joint training hub on specialised skills to combat emerging global security challenges including terrorism.

Terror attacks in the region and the instability in Somalia have forced Kenya and her neighbours to rethink their security strategies and focus more on capacity enhancement in future.