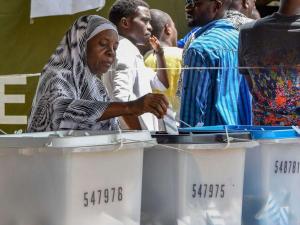 Tanzania's polls commission began releasing parliamentary election results on Thursday with the opposition losing key seats in a vote they said was riddled with irregularities.

Counting was taking place across Tanzania and its semi-autonomous archipelago Zanzibar -- which also elects its own president and lawmakers -- after the opposition reported ballot box stuffing and their party agents thrown out of polling stations.

As results trickled out on state TV, opposition Chadema lawmaker and chairman Freeman Mbowe lost his long-held seat at Hai in the Kilimanjaro region, one of several lost by the opposition.

"We can't talk about elections. It is violence. There were several deplorable incidents across the country," Mbowe told AFP on Wednesday.

Mbowe, who was brutally assaulted in what he said was a politically-motivated attack in June, tweeted that his life was "in danger" on the eve of the election, accusing police of raiding his hotel.

There are 264 parliamentary seats up for grabs in the election.

Election commission chairman Wilson Charles Mahera said they would shortly begin releasing results from a presidential race in which John Magufuli is seeking a second term in office.

"The commission is starting to receive results from the presidential election... after verification we will at any moment start publishing preliminary results," he told reporters.

Long deemed a haven of stability in East Africa, observers say Tanzania is sliding into autocracy under Magufuli and his Chama Cha Mapinduzi (CCM) party, which has been in power since independence 1961.

Magufuli, who turns 61 on Thursday, was elected in 2015 as a corruption-busting man of the people, but has drawn criticism over a slide into autocracy, crackdown on the opposition and freedom of speech.

His main challenger in a field of 15 presidential candidates is 52-year-old Tundu Lissu, who returned to Tanzania in July after three years abroad recovering from 16 bullet wounds sustained in what he believes was a politically-motivated assassination attempt.

Lissu's return reinvigorated an opposition demoralised by arrests, attacks and a ban on rallies outside of election time.

However the opposition had already voiced concern about the fairness of the election ahead of polling, and on Wednesday both parties on mainland Tanzania and semi-autonomous Zanzibar cried foul.

"Voting reports indicate widespread irregularities in the form of preventing our polling agents from accessing polling stations," Lissu, from the Chadema party, said on Twitter.

"If this continues, mass democratic action will be the only option to protect the integrity of the election."

Chadema secretary general John Mnyika told AFP their lawmaker in the Kawe district of Dar es Salaam, Halima Mdee, was briefly arrested after protesting the discovery of ballot boxes stuffed with "pre-marked votes" in favour of the ruling CCM.

In volatile Zanzibar, where the opposition ACT-Wazalendo said 10 people were killed in the run-up to the vote, party official Muhene Said Rashid showed journalists piles of stamped ballots with tick marks next to Magufuli's name which he said had been seized from CCM "zealots".

He said party agents had been kicked out of some polling stations.

The president of Tanzania's electoral commission, Semistocles Kaijage, said Wednesday night they had not yet received complaints on the incidents of ballot stuffing.

Zanzibar, which has a history of contested, violent elections, voted under heavy security, and police and soldiers, some on armoured personnel carriers, continued to patrol throughout Wednesday evening.

Assistant police chief Awadhi Juma Haji said they were "just ensuring our people of security. We were alert, no need to panic".

Opposition leader Seif Sharif Hamad has accused the ruling party of trying to steal every vote since multi-party democracy was introduced in 1995. Foreign observers have often agreed.

Tanzania's election, for which around 29 million people were registered to vote on the mainland and 560,000 in Zanzibar, took place largely without external monitors.

Most international media were unable to gain accreditation to cover voting on the mainland, and major social media networks were blocked, accessible only through virtual private networks (VPN).