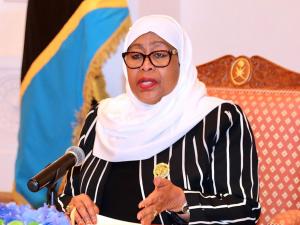 Tanzanian President Samia Suluhu Hassan is promising a better business environment for investors from Oman, seeking to leverage her country’s historical ties with the Middle East nation.
Ms Suluhu, who is making a second visit to the Middle East this year, says her administration is making it easier for foreign investors to enter the local market, including guaranteeing the safety of their investments with political certainty.

On Monday, she witnessed the signing of agreements with Omani companies involved in infrastructure, tourism and energy. She is in the sultanate for a three-day state visit, which also saw her address a business forum.
“The Sultanate of Oman is a very special country to Tanzania. There is no other country on this planet with as many of its citizens who have blood relations with the people of Tanzania,” she said in an address to a joint Oman-Tanzania business forum in Muscat on Monday.

The President was referring to the history between Oman and Tanzania’s coastal regions which were once ruled by Oman in the 18th century until the Germans came in the 1840s. That explains why many people in Zanzibar, for instance, have relations with Oman and many Omanis also run businesses on the archipelago.

For Ms Suluhu, however, that history is only part of the reasons Omanis should bring in their money. She said her country’s political stability including peaceful transitions means business people have no fear of losing their investments to instability. She also spoke of “good governance, stable microeconomic and fiscal policies, market access to the African continent (through Tanzania’s membership in various blocs)” as well as the presence of skilled and semi-skilled labour as among the reasons investors should tap the opportunity.

Addressing the business forum on Monday at the Al Bustan Palace Hotel in Muscat, the President said Tanzania is among the fastest-growing economies in Africa. Oman brought in investments worth $309 million last year, through 62 crucial projects that employed some 2489 Tanzanians, State House Dar es Salaam said on Monday.
But the Tanzanian leader wants more. After assuming office in March last year, her government has been improving its business policy to enable the private sector to take the lead in doing business, she said.
According to the 2021 World Investment Report, despite a vast effect of Covid-19 on many economies, Tanzania’s Foreign Direct Investments (FDI) grew by two percent to $1 billion, signalling the confidence of foreign investors in Tanzania’s economic prosperity.

Oman has close business ties with Tanzania with several companies from Muscat having set up investments in Tanzania mainland and Zanzibar.
Zanzibar government and Oman Investment Authority earlier this year signed an agreement for the construction of a multi-terminal port at Unguja’s Mangapwani suburb in the island.

The port will handle liquid bulk goods, containers, fishing vessels, natural gas offshore services as well as backup infrastructure for the rehabilitation of marine vessels.
Oman has also been a key destination for Tanzanians operating small-scale businesses in Muscat with others employed by Omani cargo clearing and transport companies.
The Omani government had shown an interest to invest in sugar cultivation and a processing factory in Kagera region to produce 400,000 tonnes of grain sugar (refined sugar) per year.

In 2012, the Omani-Tanzanian Businessmen Council was established to strengthen economic ties between the two countries, and was followed by the signing of an agreement in March 2013 for mutual protection and encouragement of investments, the statement said.
Data on trade between Tanzania and Oman in 2021 indicate that Omanis had exported to Tanzania goods worth 40 million rials (Tsh 244 billion, $103.89 million). The exports to Tanzania are mainly plastic products, oil derivatives, electrical and household materials and processed foodstuffs.

Tanzania had exported to Oman goods worth about Rial 9.5 million (Tsh 58 billion, $24.67 million) mostly in commodities, fresh foods, meat and assorted agricultural produce.
President Suluhu had arrived in Muscat, Oman on Sunday, and was welcomed by her host, the Sultan of Oman Haitham Bin Tariq.
https://www.theeastafrican.co.ke/tea/news/east-africa/tanzania-president...