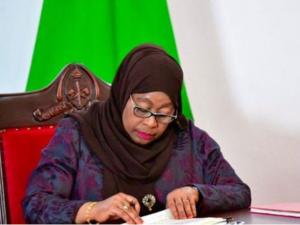 Tanzania’s President Samia Suluhu Hassan has made a mini reshuffle, nearly three months after she made major changes to the Cabinet that saw her deal firmly with emerging dissent in her party and bring her loyalists into government.

In the new changes announced by the Directorate of Presidential Communication Thursday evening, the Constitution and Legal Affairs Minister George Simbachawene moves to the Office of the Prime Minister - Parliament, Policy and Coordination, which was headed by Dr Pindi Chana.

Dr Chana, who joined the Cabinet in the January reshuffle, has been moved to the Ministry of Natural Resources and Tourism, replacing Dr Damas Ndumabro, who now takes over the Constitutional and Legal Affairs docket.