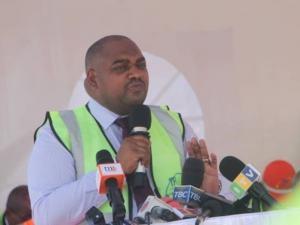 A statement from the Director of Presidential Communications, Ms Zuhura Yunus issued on July 4, 2022, says Mr Hamissi would be succeeded by Mr Plasduce Mkeli Mbossa.
Before the appointment which starts with immediate effect, Mr Mbossa served as TPA deputy director-general.

Although the State House didn’t disclose the reason for revoking Mr Hamissi’s tenure, the news of his sacking came shortly after President Hassan’s speech where she expressed her dissatisfaction with the port's operations and supervision.

“The port of Dar es Salaam has a great potential to connect African countries with their Asian counterparts that have fast-growing economies compared to others,” she said, adding that the country’s economic efforts should be directed there.
“This means those entrusted with ports supervision should now work with utmost speed. I’m not satisfied with the current pace and political interference,” she added.

The Head of State was categorical that competitors were working and carrying their operations at the highest speed, contributing to the fast growth of their port-related businesses, unlike Tanzania.

“In Tanzania, investors face endless bureaucracy and political statements. Let me say, people should start working hard at the ports,” she said, emphasizing that those entrusted with various duties at the ports clearly understand her demand.
“The port of Dar es Salaam is the economic eye of the nation. If it performs well, half of the annual budget can come from the port. But, this will only be achieved if we take measures to reorganize ourselves and work hard,” she added.

She warned that the said target would not be realized if bureaucratic tendencies continue, asking responsible officials to re-strategize, start working hard and fast, therefore improving performance.
https://www.thecitizen.co.tz/tanzania/news/national/tanzania-s-president...