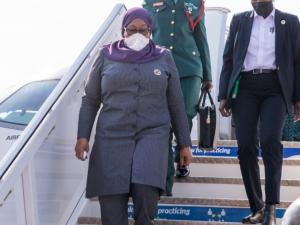 Tanzania’s President Samia Suluhu Hassan will on Wednesday head to Egypt for a three-day State visit.

She will hold bilateral talks with her host President Abdel Fattah Al-Sisi, focussing on strengthening economic ties between the two countries, the presidency has said.

President Suluhu, according to the statement by the Directorate of Presidential Communications Unit, will witness the signing of a number of deals without revealing details on what they cover.

“The President will witness the signing of one contract and seven agreements between Tanzania and Egypt,” reads the statement.

Her visit to Cairo will be the seventh State visit to African countries since taking up office in March. The Tanzanian President had been to Kenya, Burundi, Rwanda, Uganda, Malawi and Zambia.

She has also been to New York, US for the United Nations General Assembly and Glasgow, Scotland for the UN climate summit (COP26).

President Suluhu’s visits have signalled a shift in Tanzania’s foreign policy from inward-looking to embracing the world for growth.