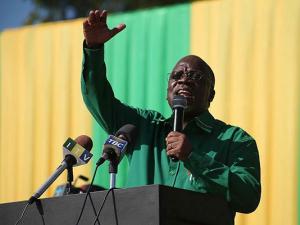 The Chairman of Tanzania's ruling party Chama Cha Mapinduzi (CCM) President John Magufuli on Thursday warned the party to stop being complacent lest it lost its trust to the people.

"Complacence led to the demise of most of the ruling parties in Africa," said Magufuli when he opened a seminar for the party's National Executive Committee (NEC) in the Lake Victoria shore city of Mwanza.

"CCM must develop and enhance the capacity to re-invent itself," he told the delegates in an address televised live by state-run Tanzania Broadcasting Corporation.

He requested the delegates to assess the party's background history, its current trend and put in place policies that focused on serving the people.

Magufuli said CCM should come up with policies that focused on serving the people for the next 10 years beginning 2020 and implementation plans for its manifesto for the next five years also starting from 2020.

He commended the party for sweeping to a landslide victory of 99.9 percent in the November 24 civic polls, saying that was a reflection that the governing party will garner a landmark victory in the 2020 general elections.