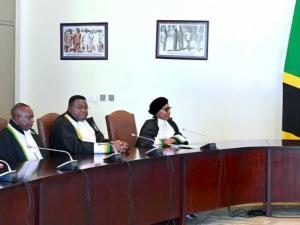 Tanzania President Samia Suluhu has affirmed the country’s support for the African Court for Human and People’s Rights.

President Suluhu made the pledge when the court’s judges paid her a courtesy call at State House Dar es Salaam early this week.

Led by the court President, Lady Justice Imani Daud Aboud, the delegation discussed the building of permanent premises for the Pan-African legal institution with the Tanzanian head of State.

The African Court, which executes duties from the northern Tanzanian city of Arusha, plans to move into its own permanent buildings.

Currently, the African Court is hosted at the Tanzania National Parks’ premises in Majengo, Arusha.

Tanzania has since approved funds for the court’s building.

The National Assembly in Dodoma endorsed Tsh4 billion ($1.7 million) for the construction in the outskirts of Arusha.

The Tanzanian government has allocated about 25 hectares of land to the court along the Great North Road on the hill known as ‘Laki-Laki.’