Tanzania's Tundu Lissu: jailed, shot, but refusing to back down 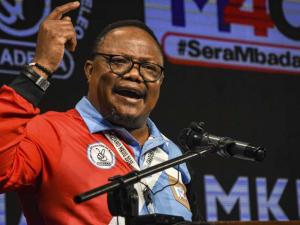 Tundu Lissu has been arrested countless times and was pumped full of bullets in an assassination attempt, but instead of shying away from politics the Tanzanian lawyer decided to run for president.

At 52, Lissu walks with a slight limp after being shot 16 times in the 2017 attack he believes was politically motivated, requiring almost 20 surgeries.

Nevertheless after returning from three years abroad, he has campaigned energetically to massive crowds, dancing on stages across the country as he rails against President John Magufuli's government for authoritarianism and a crackdown on the opposition and freedoms.

"I think I have handled the campaign pretty well so far but that is not to say that it's not difficult," he told AFP.

"I don't feel secure but there is a job that needs to be done. That job carries significant risk within it and it has to be done."

Lissu was born in 1968 in a small village called Mahambe in the central region of Singida, where he helped his family farm and took care of his father's cattle as a young boy, while attending primary school.

It was while listening to radio programmes on current affairs and reading voraciously that Lissu first got a taste for politics.

He studied law at the University of Dar es Salaam and quickly plunged into human rights and environmental law.

He worked from 1999-2009 for the Lawyers Environmental Action Team (LEAT), fighting for the rights of poor, rural communities, whether against industrial shrimp farming or foreign gold mining companies.

He also worked on environmental issues between 1999 and 2002 for the Washington DC-based World Resources Institute (WRI).

"He is not afraid to take on anyone that is challenging the rights and the livelihoods of rural people," said Peter Veit of the WRI, who has known Lissu for almost three decades and helped set up LEAT.

Veit told AFP he had discouraged his friend from returning, due to fears for his safety, but is "not at all surprised" that he did.

"He is just driven by what he sees as the wrongs of this current administration," he said.

Lissu's activism led him into politics and he was elected as a member of parliament in 2010, working his way up to being number two in the main opposition party Chadema.

While he was arrested under the previous government in connection to his mining activism, it was after Magufuli's election that he became even more vocal, slamming the president as a dictator and denouncing a climate of fear.

In 2017 he was arrested six times, and then, in September, as he pulled up outside his house in Dodoma, gunmen sprayed his car with bullets.

"You have to be aware of the fact that... all my limbs, my legs, my waist, my arms, my stomach were basically ripped apart by 16 bullet shots and therefore to mend me, to put me back on my feet, took a long time," Lissu told AFP.

He has been taken aback by the large crowds at his rallies, after a five-year ban on opposition political gatherings.

"After five years of repression, I was not expecting this kind of enthusiasm and mass support from the people," he said.

As the election draws nearer, so have efforts to frustrate his campaign, with police firing tear gas to disperse crowds who formed around Lissu on an unscheduled campaign stop.

The election commission suspended his campaign for seven days due to "seditious language" and his entire convoy was blocked for hours by heavily armed police as he headed to launch new offices earlier this month.

Lissu said the opposition has "gone through hell during these five years".

He believes his party will win, but that the election will not be a fair race, with an election commission appointed by the president.

Lissu is married to a fellow lawyer, Alicia Magabe and has two sons, who have been in high school in the US since he fled in 2017.