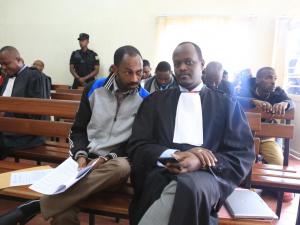 Terror suspect Callixte Nsabimana aka "Sankara" appeared before Kacyiru Primary Court on Thursday where he was charged for 16 terror-related crimes.

The session started with prosecution laying out the charges that included attacks on Rwandans that left up to nine people dead and many others injured.

He was also charged with forming a rebel group that carried out the terror attacks, mainly in southern Rwanda.

“Let me address the Nyungwe attacks (of last year)…we had given FNL specific instructions that whatever operation they launch, it should be about destroying bridges, ambush military vehicles, attack sector and district office as well as police and military camps,” Nsabimana told the court.

“We didn't expect them to attack civilians,” he added.

FNL is the terror group he was involved with and held the title of spokesperson.

“When I was arrested and showed evidence of what had happened. I was shocked to see that six people were killed and most were women,” he told the packed courtroom that was dead silent in reaction.

The court also heard of the facilitation Nsabimana received from Burundi and Uganda, two of Rwanda’s neighbours.

The suspect told the court of some details of the kind of support he received.

“I have been working with people from the Intelligence in Burundi but to be specific, the government and military were not involved. They were not aware of our clandestine operations. In fact, some of our people were arrested there many times,” Nsabimana said.

In March, the suspect was facilitated by a one Major Bertin aka Moses; Burundi's External Intelligence Officer and a Ugandan Captain Sunday Charles to meet Uganda's Brig. Gen. Abel Kandiho.

“We met Ugandan military officials. There was a scheduled meeting with Brig. Gen Kandiho [Head of Uganda’s military Intelligence] but on the day of the meeting, he had an emergency so he sent a Colonel. We requested for military and diplomatic support and by the end of the meeting we were given a positive answer.”

“By the time of my arrest, our delegation was in the process of going back to Uganda to collect on the promise.”

During his pre-trial hearing before Kacyiru Primary Court located in Kibagabaga, the prosecution said that the accused, who calls himself 'Sankara', had fully cooperated during the questioning.

Appearing in court alongside his lawyer Moise Nkundabarashi, the suspect and denounced his terror outfit.

“From today onwards, I am done with FLN and whatever else they may do is on them not me,” he said. “I did not give them the instructions to kill civilians and I take responsibility for my part in it.”

The suspect told the court that he was remorseful.

“I would like to apologise to the President, the injured, the families of the ones that passed away and to Rwandans in general,” he said.

The charges he is facing include; terrorism, murder, kidnap, genocide denial, arson, armed robbery, forgery and causing bodily harm among others.

The prosecution, which is in possession of the suspects three cell phones, a fake Lesotho passport and four pairs of sunglasses asked court that the suspect remains in custody owing to the gravity of the alleged crimes and the fact that he has no known address.

During the hearing, prosecution asked that the accused be remanded, advancing a number of reasons including the fact that he would tamper with evidence and was a flight risk, considering the crimes he stands accused and him not having a current address in Rwanda.

Court said they would deliberate on the bail application and render the verdict on Tuesday May 28.