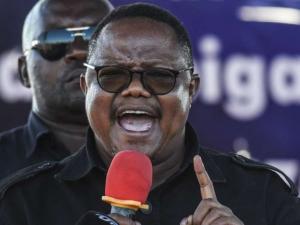 He disclosed that about 1,020 Chadema councillorship aspirants were disqualified out of 3,754 candidates who were in the race in 3,955 wards in mainland Tanzania.

According to the main opposition Chadema party leader, 53 candidates for parliamentary seats have also been eliminated from election participation out of 244 hopefuls approved to contest the October 28 elections.

“They have been eliminated even before the election whistle has been blown. Candidate disqualification has been done unjustifiably against legal procedures and rules,” he said during his maiden rally at Zakhem grounds in Dar es Salaam last Friday.

“In Zanzibar, as the chairman said, the opposition political party ACT-Wazalendo has suffered a similar blow where a total of 47 candidates including 16 from Pemba have been disqualified,” he claimed.

He claimed the move was intentional to ensure that the ruling Chama Cha Mapinduzi (CCM) is declared winner without elections, a tactic he claims was applied during the 2019 civic polls across the country.

According to him, returning officers are implementing instructions given to not declare opposition candidates as winners because it is the government that pays their salaries and provides them with cars and other benefits.

Mr Lissu said party campaign rallies at all levels would start with peaceful protests to demand justice for barred candidates across the country.

“We call upon the National Electoral Commission (NEC) to dispense justice to Chadema’s disqualified candidates and all others from opposition political parties. We will protest peacefully, no stone will be thrown nor shots made,” he said.

He instructed every Chadema candidate countrywide to conduct a peaceful protest to demand justice for the other candidates who have been disqualified for the October polls before bidding for votes.

During his maiden political rally, Mr Lissu said Chadema had no plans of boycotting the General Election, but called for the support of citizens so that all would be done fairly.

“It’s true we don’t have money to fund our campaign, but we need your support for us to remain in the frontline,” he said.

He also spoke about the attempt on his life, and thanked all those who were involved in keeping him alive.

“Although I carry many scars, I thank God that I’m alive. I thank everybody across the world for their role to save my life through prayers, blood donations and financial support,” he said.

Mr Lissu, who arrived back in the country on July 27 this year after three years in exile, is considered the main challenger to President John Magufuli.

He survived an assassination attempt on September 7, 2017 at his home in Dodoma.

At the time, President Magufuli conemned the act as "cruel and inhuman".