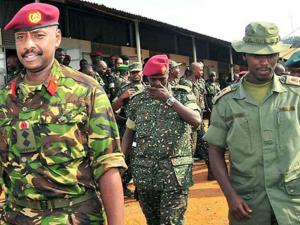 “You have refused all our appeals! Well, now we are coming and hell is coming with us!” the Uganda People’s Defence Forces (UPDF) land forces commander Lt Gen Muhoozi Kainerugaba warned.

The government has long persuaded the bandits to abandon their activities but conservative estimates show the rustlers have through persistent raids claimed almost 50 civilian lives and close to ten security officers in the last three months.

Almost every week, hundreds of animals are reported stolen across the Karamoja even after the army reinforced deployment in October 2021 to deter the criminals feared to have over 500 guns, illegally.
"They have provoked us and now we are going for them wherever they are," UPDF 3rd division commander Brig Joseph Balikudembe told Daily Monitor on Tuesday.

Military accounts show that 251 of the rustlers were killed in 2021 alone. The army has since captured over 1,600 others with about 15,000 livestock and 160 guns recovered.

To the concern of local leaders, insecurity in the Karamoja region has escalated, disrupting relative peace restored in 2008 after a five-year disarmament enforced by government.