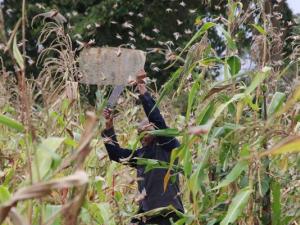 Ugandan officials plan to send soldiers and supply equipment to tackle the invasion by desert locusts.

The locusts were spotted in Amudat District in the semi-arid Karamoja sub region at the weekend, and by Sunday evening had spread to two other districts.

Prime Minister Ruhakana Rugunda held an emergency meeting with officials on Sunday night to strategise on how they will tackle the locusts, which have already caused havoc in parts of northern Kenya, Somalia and Ethiopia.

The meeting resolved to deploy 2,000 soldiers to the region on Monday. The state will also provide manual and motorised spray pumps to fight the locusts.

Mr Rugunda said in a tweet that “he had summoned political leaders and technical officers to immediately swing into action with the preparedness interventions…to deal with the desert locusts invasion.”

The government is also considering aerial spraying of the locusts.

It has set aside $4 million for dealing with the locust invasion.

Another government minister has suggested the insects can be eaten like grasshoppers, a common delicacy in Uganda.