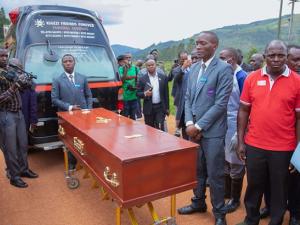 Uganda has handed over the body of a Rwandan national who was last Friday shot while smuggling in Tabagwe – Nyagatare district before running back to Uganda where he would subsequently die.

While handing over the casket of the Rwandan national at Gatuna boarder post, Uganda was represente by Police and other officials led by women MP Caroline Kamusiime while Rwanda was represented by David Claudien Mushabe, the Nyagatare district mayor and his delegation.

Addressing his colleagues from Uganda, Mushabe used the opportunity to ask them to stop illegally detaining Rwandans, even as they handed over the body of a Rwandan who was unfortunately killed as part of normal security and law enforcement exercise.

The mayor said that it was sad Rwandan officials were receiving a dead body of a Rwandan when those who are still alive are still languishing in jail.

Rwanda has previously said that hundreds of nationals are being held in different ungazetted places in Uganda, including military barracks.

Mushabe explained to Ugandan officials, who were led by Woman MP for Rukiga District, Caroline Kamusiime, that illegal trade is the reason behind the death of the Rwandan trader and one Ugandan resident.

“It’s good that you have brought us the deceased but it would be much better if you can also bring us some more Rwandans who are alive and are being held in your territories. There are so many people there,” he said.The mayor told the Ugandan officials that even on Saturday two Rwandans were abducted in Uganda and he condemned the practice.

“The way you have brought us the dead body it is better you bring us those who are alive too. It can make us happy on both sides if it’s done,” he told the Ugandan officials.

Rwanda’s StateMinister of Foreign Affairs, Olivier Nduhungirehe, reiterated the same message in a tweet he sent shortly after the deceased’s body was handed over.

The deceased, whose body was identified by his family members, is a local small cross-border trader named Pierre Nkerenke who was living in Nkoma village in Tabagwe Sector of Eastern Province's Nyagatare District.

He was riding a motorcycle in his home area when he resisted calls by Rwandan security officers to stop, which resulted into his shooting as he was a suspected smuggler.

Nkerenke was suspected to have been smuggling into the country used apparel (Caguwa) from Uganda and he reportedly decided to turn aggressive towards the security personnel and got reinforcement from machete-wielding backers from across the border in Uganda.As a result, Nkerenke, who has since been mistakenly identified by Ugandan officials as John Baptist Kyerengye, was shot dead in the ensuing fracas, together with a Ugandan identified as Alex Nyesiga, who was among the mob backing the Rwandan smuggler.

Uganda’s Woman MP for Rukiga District where the porous border from where the deceased were shot is part of, Caroline Kamusiime, said that she wasn’t aware of illegal detention of Rwandans.

She called for cooperation between the two countries’ officials to tighten security on both sides of the border.

“One thing I can promise you is that we are ready to cooperate with you,” she told the Rwandan mayor, promising to inform herself more on the reports about illegally detained Rwandans in Uganda.

She also said that her home region would tighten security at the border with Rwanda and also nurture more cooperation with Rwandan officials to fight crime.