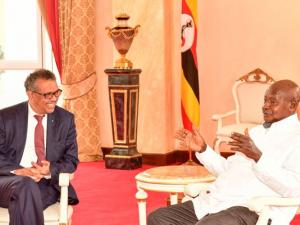 The medicine is expected in the country in two weeks after they were cleared by the National Council of Science and Technology and National Drugs Authority.

“It is still a trial drug. We can only administer it in a research. Uganda is ready to go. Our threat of Ebola has not reduced. We shall maintain ourselves in a response mode because the borders are still open and Ebola in DR Congo is not going down and the affected areas are near us,” Dr Aceng said.

Prof Pontiano Kaleebu, the director of Uganda Virus Research Institute (UVRI), said there are four different types of the drug: one is made of antiviral antibodies while the other three are monoclonal antibodies.

“If you use them, the number of those who survive increases compared to supportive treatment where they mainly use fluids and nutrition,” Prof Kaleebu stated.

Uganda has not registered any new confirmed Ebola case, but there are two people displaying Ebola symptoms who have been put under isolation at Bwera Ebola Treatment Unit.

“Currently, 92 contacts to the confirmed Ebola cases in Kagando and Bwera are being followed up daily.” the press statement issued on Tuesday states.

By Monday, a total of 128 contacts and non-vaccinated frontline and health officers had been vaccinated.

Dr Ghebreyesus visited Butembo and Katwa, areas affected by the outbreak in North Kivu Province in Eastern DRC prior to his arrival in Uganda.