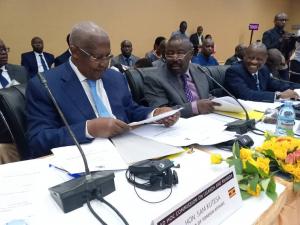 The Ad Hoc Commission of Ministers and other officials from Rwanda and Uganda are to meet this Friday at Gatuna One Stop Border to lay ground for the 4th Quadripartite which will take place on February 21.

However ahead of the Friday meeting, there has been only little progress on the recommendations of the 3rd Luanda summit which took place on February 2nd.

Rwanda’s Minister of State for Foreign Affairs in charge of the East African Community Amb. Olivier Nduhungirehe told KT Press on Wednesday that the Friday meeting will assess the progress on the implementation of February 2 Luanda recommendations.

“Yes and we will discuss progress on Friday,” Nduhungirehe said, days after Rwanda expressed concern over recent developments in Uganda.

The death of a Rwanda national, Emmanuel Magezi, who was illegally held by Uganda’s Chieftaincy of Military Intelligence (CMI) due to reported torture and inhuman treatment seems to have set back the progress registered.

On January 31, 2020, his lawyer, Eron Kiiza filed an application in the Civil Division of High Court in Kampala demanding his production in court.

His lawyer also demanded for an explanation from security organs and the government about the illegal detention of his client for ten months without any charges being brought against him.

Reports further indicate that the application was scheduled to be heard next Monday but his lawyer Kiiza received reliable information indicating that Magezi could have succumbed to his injuries.

On Saturday February 8, Nduhungirehe said that the death of Magezi is a setback in the efforts to resolve the crisis.

“Despite the ongoing Luanda process, the illegal detention of Rwandan citizens in Uganda has reached an unprecedented level. They are now dying due to regular beatings and sustained torture by CMI operatives,” Nduhungirehe said on Twitter, adding that the Government of Uganda must release all detainees before it is too late.

Over the last two weeks, President Paul Kagame and President Yoweri Museveni have met in two different locations –in Addis Ababa at the 33rd African Union Summit and on Tuesday at the burial of former Kenyan President Daniel Arap Moi but it is not clear if the two heads of states had a discussion.

Circumstances under which Magezi was killed remain unclear but a letter signed by the Officer in Charge of Criminal Investigations Department at Butabika Police Station published by the Daily Monitor confirmed that Magezi died in Kirinya Ward in Butabika Hospital on January 21, 2020 at about 9am.

Magezi’s family, which lives in Rwanda, says they never got any official information from Ugandan authorities regarding his death. They have requested the government to assist in ensuring that his body is repatriated.

Amb. Nduhungirehe said Rwanda’s High Commission in Kampala is following up on the matter.

Rwanda maintains that Uganda must release dozens of Rwandans still detained in Uganda and cease all forms of support to armed groups fighting the government of Rwanda if the situation is to normalise.

Officials from Rwanda and Uganda met at Gatuna last week to kick off preparations for the February 21 meeting between President Kagame and President  Museveni.