Uganda-Rwanda ties: No word from Kampala as 30 days elapse 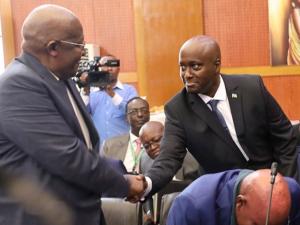 When Rwandan and Ugandan officials met in Kigali last month on September 16, both parties agreed that a follow up meeting, to iron out the differences between both countries would happen 30 days later in Kampala, Uganda.

Those 30 days, however, elapsed on Wednesday with Kigali not hearing from Kampala.

When the parties met last month, Kigali had invited the Kampala delegation which was headed by Ugandan Foreign Affairs Minister Sam Kutesa.

It was expected that Kampala would then invite Kigali for the follow up meeting, but according to Rwandan officials, nothing happened.

Olivier Nduhungirehe, the Minister of State in charge of the East African Community, on Wednesday evening indicated that Kigali was still waiting to hear from Kampala.

Nduhungirehe said: "Rwanda is waiting for an invitation by the Ugandan side for the said meeting."

Last month's meeting ended without a major breakthrough with both sides agreeing to meet in Kampala after 30 days to review progress on the implementation of the Memorandum of Understanding signed in Luanda, Angola a month earlier.

According to a joint statement, which was released shortly after almost six hours of talks at the Ministry of Foreign Affairs headquarters in Kimihurura, the Rwandan delegation served their Ugandan counterparts with a list of Rwandan nationals who are illegally held in Uganda.

At the time, Nduhungirehe told the delegates at the joint Ad hoc Commission meeting that persistent arbitrary detention and torture of innocent Rwandans in Uganda was one of the issues that have undermined bilateral relations between the two neighbours.

In March, Kigali issued an advisory on Uganda travel saying it could not guarantee its citizens’ safety there.

Among others, it was expected that the second meeting would discuss issues of mutual concern such as free movement of persons, goods and services across the common border.

According to the joint September statement, Uganda promised to verify information related to the Rwandans detained there.

Kigali among others accuses Uganda of aiding armed elements that seek to destabilise Rwanda.

A UN report released in December 2018 confirmed that Uganda was a major source of recruits for Rwandan rebel outfits based in eastern DR Congo.

Two senior leaders of the FDLR militia arrested by Congolese authorities last year and transferred to Kigali confessed in court that they were seized as they returned from a meeting with Ugandan and RNC officials in Kampala.

Last month, the two delegations agreed on a number of issues of mutual concern, including Rwanda providing Uganda with a list of its nationals believed to be detained in Uganda and the latter committed to verify the information.

The verification would allow for due process including releasing those against whom no evidence of criminal conduct will have been found, officials said at the time.

Both parties also agreed that due process will be followed in dealing with each other’s citizens and they reiterated their commitment to refraining from any acts of destabilisation against each other.

Rwanda has accused Uganda of being involved in “acts of economic sabotage” against Rwanda, and called for “full and meaningful implementation of the Luanda MoU.

The September meeting was attended by delegates from the facilitators of the peace effort, Angola and DR Congo, with the former represented by its Minister for External Relations Manuel Domingos Augusto, while the DR Congo was represented by Deputy Prime Minister and Minister for Interior Gilbert Kankonde Malaba.