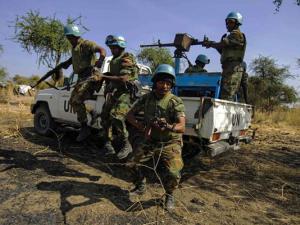 UNMISS said it temporarily re-deployed 75 Nepalese troops from Rumbek to Maper, where some 79 people have reportedly been killed and over 100 injured during renewed inter-communal clashes and revenge attacks between the Gak and Manuer communities.

"This fighting must stop," David Shearer, the Special Representative of the Secretary-General and UNMISS head said in a statement issued in Juba.

The peacekeeping mission said while political violence has largely subsided in the east African country since a peace agreement was signed in September 2018, inter-communal clashes continue to result in the killing and injuring of civilians, cattle raiding and the looting of property.

UNMISS added that it also dispatched senior officials to the area to meet local authorities and try to convince the leaders of the warring factions to embrace dialogue.

"We are urging the communities involved and their leaders to put an end to the violence and to come together in reconciliation and peace for the good of their people," Shearer said.