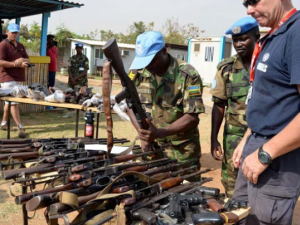 The United Nations Security Council has unanimously passed a resolution demanding an immediate 90 days’ cessation of hostilities in conflict zones around the world due to the impact of the novel coronavirus.

The countries include South Sudan, Yemen, Libya, Syria and the Democratic Republic of Congo.

It is the first resolution related to Covid-19 the Council has passed.

The resolution calls for all parties to armed conflict to engage immediately for a durable humanitarian pause for 90 consecutive days to allow for delivery of humanitarian aid and medical evacuations.

However, the resolution doesn’t apply to military operations against ISIS and al-Qaeda.

According to experts, unlike resolutions of the UN General Assembly, this resolution of the Security Council is legally binding.

The Council is expected to follow through with tougher actions on countries that violate the 90-day cessation of hostilities.

Many South Sudanese in Equatoria regions are reported killed and displaced due to fighting in the area between armed groups.

The clashes began last year have led to the hundreds of deaths and thousands have been displaced, according to UN reports.

There are reported inter-communal clashes in Lakes, Warrap, Upper Nile and Jonglei States that have forced some humanitarian and charity groups, such as the International Committee of Red Cross, to suspend their operations.