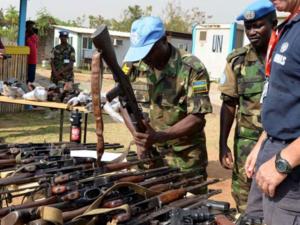 The UN Security Council on Thursday renewed an arms embargo and sanctions against South Sudan amid continuing unrest in the country.

A resolution to extend the ban through May 2023, drafted by the United States, was passed with 10 out of 15 votes, with Gabon, Kenya, India, Russia, and China abstaining.

The embargo was imposed in 2018 after a peace agreement ended five years of bloody civil war between factions loyal to President Salva Kiir and Vice President Riek Machar.

When the embargo was last extended a year ago, authorities in South Sudan were given a list of political and security conditions in order for the restrictions to be lifted or relaxed.

However, earlier this month, a UN expert panel recommended that that the embargo remain in place over persistent ceasefire violations as well as over the government's imports of armoured vehicles in violation of the ban.

And UN Secretary General Antonio Guterres said more progress is needed in the areas of disarmament, demobilization and reintegration of combatants.

A diplomatic source said the resolution passed Thursday contains a provision for a possible easing of the restrictions for non-lethal military equipment if it is needed to fulfil the 2018 peace agreement.

The provision was included at the request of the Security Council's three African members, Kenya, Gabon, and Ghana, the diplomatic source said.

The youngest country in the world, South Sudan has experienced chronic instability since becoming independent from Sudan in 2011.