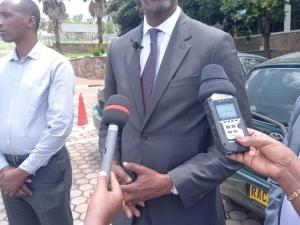 Victims of the attacks carried out by Rwanda Movement for Democratic Change (MRCD)/National Liberation Front (FLN), led by Paul Rusesabagina, want to meet the U.S. Secretary of State, Antony J. Blinken when he visits Rwanda next week in a bid to have their voices heard when the U.S official engages with the Rwandan government on the issue of Rusesabagina.

The victims, through one of their lawyers, Faustin Murangwa, have written a letter which was delivered to the U.S Embassy in Rwanda, requesting a meeting with Blinken, who will have a two-day visit from August 10 to 11.

While in Rwanda, Secretary Blinken is expected to hold talks with senior government officials, including President Paul Kagame, on a number of issues, including the situation in the Democratic Republic of Congo (DRC) and the case of Rusesabagina, who was sentenced to 25-years in prison last year after he was found guilty on terror-related charges. The U.S says Rusesabagina was wrongfully arrested.

Rwanda maintains that no international laws were broken when Rusesabagina was tricked into getting on a plane which ended up in Kigali where he was arrested and dully charged in courts of law over the FLN attacks in South Western Rwanda between June 2018 and April 2019, claiming at least 9 people and injured many as the militia ransacked villages and trading centres.

In their letter, the victims of the attacks are seeking an audience with Blinken to express their concerns in regard to the pressure being exerted by the U.S government on Rwanda to release Rusesabagina, who holds permanent residency of the North American country
“We request an opportunity to have a discussion with you on the devastating impact these attacks had and continue to have on our families. We wish to ensure our voices and experiences are not erased in the debates surrounding Paul Rusesabagina,”

“Mr. Secretary, we noted with great alarm and sadness that there have been numerous calls from the US government officials for the immediate release of Paul Rusesabagina on humanitarian grounds. We are very concerned that the justice that was served is now a significant risk considering the pressure being applied to release Paul Rusesabagina,” the letter reads in part.

The victims say Rusesabagina founded and financed a terrorist organization that carried out violent attacks on their families between June 2018 and October 2019 and that the terrorist group continues to operate to this day with the same intention to carry out more attacks in Rwanda.

They add that Rusesabagina’s armed group inflicted extreme physical, emotional and financial damage on them and killed innocent men, women and children, leaving widows to raise children alone, orphans to grow without the love and support of their parents, businesses ruined, families dispossessed of their hard-earned property, dreams shattered and our families fearing for their safety.

The victims further say they welcomed the process that saw Rusesabagina and his co-perpetrators made to answer for their crimes in a court of law and any attempts to release him would undo the justice they were served.
“Most of these perpetrators, including Paul Rusesabagina, admitted to founding the terrorist organization and tasking It with carrying out the very armed attacks that took the lives of our loved on and left some of us injured, disabled and destitute. The Court found Paul Rusesabagina guilty of these terrorist acts and sentenced him and his co-perpetrators to imprisonment,”

“Mr. Secretary, we have been encouraged by your demonstrated commitment to prioritize human rights across the globe. The American people share our values of justice and accountability especially as it pertains the human rights of victims of terrorist acts,”
“We believe our voices should be heard and human rights considered in your engagement on the issue. We hope to have an opportunity to discuss further our quest for truth, justice and dignity,” it adds. With the letter, they annexed a list of victims of Rusesabagina’s MRCD-FLN terrorist attacks.

In March this year, the victims delivered a petition to the U.S, Belgium and European Union missions in Kigali demanding that their voices are heard. In April, the Court of Appeal reaffirmed Rusesabagina’s 25-year sentence while Callixte Nsabimana, the former spokesperson of FLN, had his sentence reduced to 15 years.
https://www.ktpress.rw/2022/08/victims-of-fln-attacks-seek-meeting-with-...