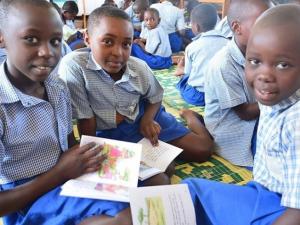 As the world celebrated the 32nd International Day for the Eradication of Poverty, on Thursday, the World Bank announced a new target seeking to halve the global rate of Learning Poverty by 2030, effective next year.

Learning Poverty is defined as the percentage of 10-year-olds who cannot read and understand a simple story. This challenge, experts say, is at the heart of global poverty.

The target comes as a database developed jointly by UNESCO and World Bank revealed that 53 per cent of children in low- and middle-income countries can’t read and understand a simple story by the end of primary school.

In poor countries, the level is even higher – at 80 per cent.

Such high levels of learning poverty are an early warning sign that all global educational goals and other related sustainable development goals are in jeopardy, the Bank said in a statement.

It further said that “Taking learning poverty to zero – assuring that all children are able to read – is a fundamental development objective, as is eliminating hunger or extreme poverty.”

At 98.7 per cent, Niger is the worst performer.

The report does not contain figures about Rwanda but World Bank officials said Thursday during an event in Kigali that national statistics about this indicator could be available in the near future.

“Specific estimate for Rwanda and some other countries are not in the report because some of outcome related indicators are missing, but when Rwanda starts to take our assessments we will be able to come up with more specific indicators,” said Aghassi Mkrtchyan, Senior Economist in the World Bank Rwanda.

Mkrtchyan noted: “looking at the broad picture of these findings, the issue is alarming. But, together with the Government of Rwanda and other partners, I’m sure we can seriously take care of it.”

Participants were drawn from education sector stakeholders and they discussed what needs to be done at the national level to improve on the front of tackling learning poverty.

The fourth Population and Housing Census in Rwanda conducted in August 2012 (2012 RPHC) showed that 68 per cent of Rwandan population aged 15 years and above were literate, up from 64.4 per cent a decade earlier.

Angelique Tusiime, the deputy director general at the Rwanda Education Board, told the media that overcrowding in classes was still a challenge for the country.

“So far, in Rwanda, all children at that age are in school. But we still have a challenge of overcrowding in classes which affects the quality of their education,” she said.

UNESCO recommends that one teacher should teach between 30-35 students, but there are schools in Rwanda where a teacher handles even over 70 students.

“We have devised homegrown solutions to tackle the issue. They include constructing classes during community work (Umuganda) and encouraging parents, through community meetings, to help their children embrace the reading culture,” Tusiime added.

What needs to be done?

The World Banks makes four recommendations in its report. They include, ensuring political and technical commitment to clear goals, means, and measures for literacy; ensuring effective teaching for literacy; ensuring timely access to more and better age and skill-appropriate texts; and teaching children in the language they speak and understand early on.

Pacifique Mahirwe who works for Rwanda Bookmobile, a children’s library that seeks to foster a love of reading, says that for Rwanda to eradicate learning poverty, parents have a big role to play.

“Parents’ role is crucial because the reading culture begins at an early age, even when a baby is still in the womb. Parents should go back to the oral story-telling culture, which will eventually connect the child to the book as he grows,” he said.