You are a pillar of resilience, First Lady tells Genocide widows 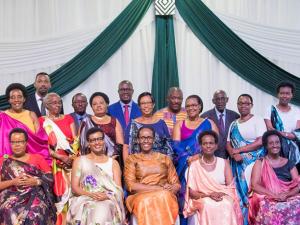 The First Lady, Mrs. Jeannette Kagame on Sunday, February 23, told men and women that were widowed as a result of the 1994 Genocide against the Tutsi that their lives are an example of resilience to future generations.

The First Lady was speaking during a celebration marking the 25th anniversary for the founding of the Association of Widows of the 1994 Genocide against the Tutsi (AVEGA-Agahozo), - which was established in 1995 by Rwandans that had lost spouses during the Genocide.

At its founding, AVEGA-Agahozo aimed at forming a platform where Genocide widows would comfort each other in the light of what had happened to them; putting efforts together to forge a living, as well as help raise orphans left behind by the 1994 massarces, that claimed up to 1 million Tusti lives.

Today, the organisation through different efforts has been working to give widows a decent life, helping them rise from the sorrow and pain of the Genocide.

Among other things, AVEGA-Agahozo has built 3 health centres and a clinic treating up to 250,000 people. The organisation also gives HIV treatment to more than 2,500 people, and has started a program of giving advice to survivors in regard to testing for HIV, and other forms of counseling to those infected.

Speaking to the members of the Association and other officials that turned up for the anniversary celebrations, Mrs. Kagame praised the widows for the resilience despite what happened to them, and their zeal for living as well as supporting each other.

“You came together, comforted each other, built each other, brought up the orphans – nurturing children for Rwanda and building the country,” she said, adding that in the country’s vision 2050, members of AVEGA will be “a source of values of resilience to the young ones,” as well as an example for coming generations with regard to what it takes to regain the nation.

“You will be a fire that destroys evil and replaces it with good, a source from which the young generations will continue to draw happiness - since you have nurtured them on the shawl of resilience.”

Highlighting what AVEGA members have done, Charles Habonimana, a survivor who lost both parents during the Genocide spoke about how the widowed mothers supported him and other children in the aftermath of the atrocities.

“When the Genocide had ended, I became the widows child, just like many other children that didn’t have parents. You could find about 20 children living together in one place, and being supported by widowed women,” he said.

Valerie Mukabayire, the President of AVEGA-Agahozo thanked the leadership of Rwanda for, among other things, stopping the Genocide against the Tutsi in 1994. She thanked the First Lady for her support to the Association in the form of advocacy, that helped them get the necessary resources, as well as, among other things, establish a fully equipped health centre.