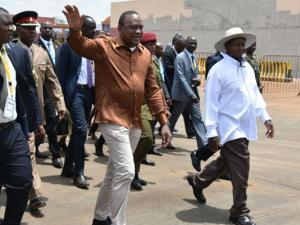 He will be hosted by President Uhuru Kenyatta at State House, Mombasa, where the two leaders will hold bilateral talks and a joint press briefing.

“During the two-day State visit, President Museveni, accompanied by his host President Kenyatta, will tour the port of Mombasa,” State House spokeswoman Kanze Dena said in a statement to newsrooms.

The visit comes amid a longstanding feud between Uganda and Rwanda.

But Uganda has denied all the allegations. Recently, Rwanda temporarily closed its border with Uganda leading to massive losses for businesses.

The escalating tensions prompted Mr Kenyatta to engage in shuttle diplomacy on March 11, when he travelled to Kigali and held talks with Rwandan President Paul Kagame.

He then stopped over in Kampala on his way back to Nairobi, where he held discussions President Yoweri Museveni.

"We are faced with some challenges as neighbours and as a region. Through goodwill and good intentions, we will resolve these challenges," Mr Kenyatta said in Kigali.