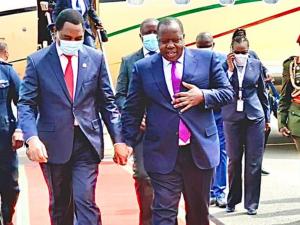 Zambian President Hakainde Hichilema is meeting his host counterpart Uhuru Kenyatta in Nairobi as he begins his first official trip to Kenya since he took power last year in August.

And according to the Zambian leader, the meeting is part of his constant search for economic opportunities for his people.

"We’ve safely arrived in Nairobi, Kenya. Your Chief Marketing Officer is here to enhance trade and investment opportunities between our two countries and place Zambia on the world map as an ambitious country whose focus is economic development for the people,” he tweeted after arriving in Nairobi.

President Hichilema touched down shortly after midday and was welcomed by Kenya’s Interior Cabinet Secretary Fred Matiang’i at the Jomo Kenyatta International Airport before heading to State House for bilateral meetings with his host Uhuru Kenyatta.

The Zambian leader is accompanied by several senior government officials including Zambia’s Minister for Commerce, Trade and Industry Chipoka Mulenga and is expected to discuss business with his hosts.

Mr Hichilema will on Thursday visit the innovations incubation laboratory for techies, I-Hub in Nairobi and the Maramba tea factory in Limuru, according to State House spokesperson Kanze Dena Mararo.

On his sixth bid for the presidency, Hichilema defeated the incumbent Edgar Lungu, 64, by almost one million votes -- a landslide spurred by economic hardship and restricted freedoms under the previous regime.